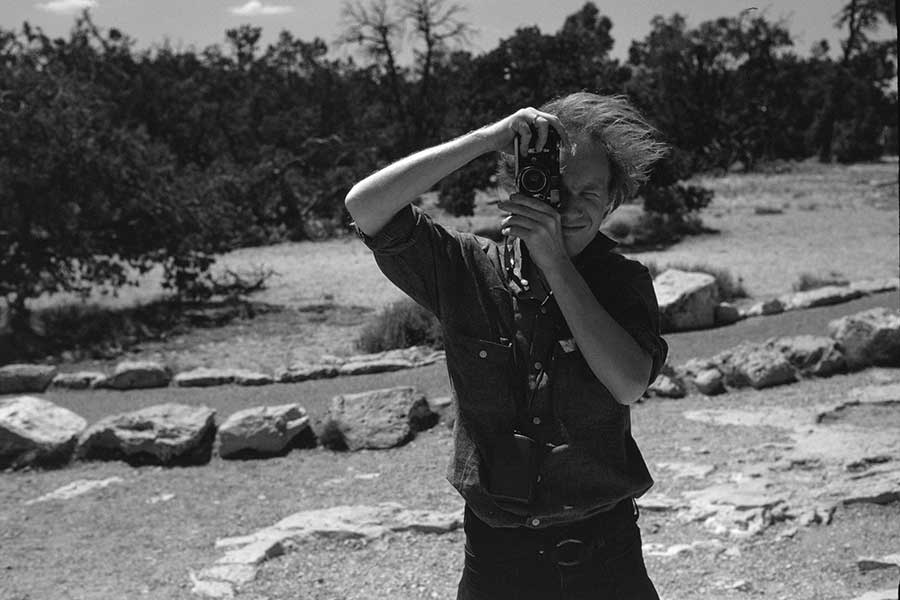 Portraiture by Other Means:

Throughout his artistic life Richard P. Rogers (1944-2001) was active both as a celebrated director/producer of non-fiction films and a beloved teacher and mentor at Harvard, where he taught still photography and filmmaking. Rogers’ omnivorous appetite for knowledge took him around the world; from the jungles of Nicaragua to the fountains of Rome, from the bedrooms of colonial New England homes to the streets of working-class Albany. But Rogers’ most important subject was ultimately much closer: himself, explored in films that turned inward to critically examine his own life and art. This program brings together Rogers’ most accomplished short films, each in their own way self-portraits of sorts that explore the struggles of the photographer-turned filmmaker to capture the often elusive essence of his subject, be it a singular place, such as a quarry, community and zeitgeist in Quincy, Massachusetts, or a family history, as in Elephants, or an uncertain relationship as in 226-1690, or, as in Moving Pictures, an artist trying to craft an animated allegory of psycho-sexual and geopolitical uncertainties. — Haden Guest

All films in this program are presented as digitized versions of 16mm prints from the Harvard Film Archive Collection.

Quarry makes fine use of Rogers’ background as a still photographer. Still photographs allow one to contemplate the surfaces of things, textures and light, and to speculate on their broader context at one’s leisure. Narrative filmmaking more often uses image to propel action and story, leaving a more contemplative vision in the dust. But documentary filmmaking of the best sort (a sort that seems to be vanishing, but which was still alive for Rogers) creates a different sense of pace and time, allowing the feel of things—the rough surface of rocks, the sheen of wet skin, the transient plumes of splashing water—to enter our consciousness. Rogers begins his portrait of this place by focusing on natural elements: rock, water, sky, and the remains of the labor that carved the rocks—rivets left in the stone, rusting machinery—as the echoes of the rock cutting of the past reverberate on the sound track.

This empty landscape soon fills with action as Rogers’ main subject takes over: the working class kids and adults who use the quarry as a place of recreation, a non-commercialized water park that belongs to them through their use of it, a place where they can swim, talk, flirt, dive, drink beer, gamble, inscribe their names in graffiti on the cliffs—have a good time with a hint of danger. As Rogers films their pastimes, one senses the mixture of alienation and fascination these working class guys and girls had for this Harvard student, born on New York’s posh Park Avenue. But Rogers does more than simply observe; he also listens. While the images detail the dives, the climbing, the games and stunts, the sound track picks up conversations which tell us this space serves as a haven, a place defined by its difference from the daily grind, an escape from regulation by factory bosses or cops on the street. From these ambient voices on a richly layered sound track, we also pick up stories of death and injury from Vietnam, and recall the year of the film was shot. 1967 saw the height of this conflict, and young men like these formed the troops who fought and died in that war.

In an application of Soviet filmmaker Sergi Eisenstein’s theories about the relation between sound and image, what we hear on the sound track transforms what we see on the screen. As we listen to discussion of bombs and gunfire, the images of divers hitting the water begin to resemble explosions. Yet the subtlety of this transformation must be stressed. We don’t see the divers as B-52s; they remain kids having fun. Rather, the violence referenced here, far from overwhelming the image, forms a new horizon of significance, an overtone of threat rather than a forced metaphor. Rogers also re-tools a lesson in editing from Leni Riefenstahl’s powerful diving sequence from her film of the 1936 Olympics in Nazi Germany. Both Riefenstahl and Rogers cut on the divers’ falls through the air, interrupting the action so that they never reach the water, leaving them suspended in midair in an impossible ecstasy of flight. But whereas Riefenstahl’s images exalt powerful male bodies in a thrust of aggression, Rogers captures the frail bodies of adolescents in a moment of soon-to-be-curtailed delight. Riefenstahl creates cinematic supermen sailing over the earth. Rogers shows us a moment of liberation that we know must surrender to the pull of gravity. Like the haven of the quarry itself, Rogers transforms this free fall into a temporary respite in a world otherwise bound by restrictions, unappreciated work and, ultimately, worldwide aggression.

The alienation that appears as an undertone in Quarry becomes the main topic of Elephants as the filmmaker steps into the spotlight in this autobiographical film. But how central to the film is Dick Rogers? He first appears five minutes into the film, after a plethora of family album photographs chronicling the elegant life styles of his upper class ancestors, posed in their starched collars and billowing dresses, and the intertwined (but absolutely separate) voices of his father and mother on the sound track. After panning over a baby picture, the camera pans and picks up Rogers staring straight on at the camera, as if posed for a mug shot. The filmmaker seems in this image more the subject than the author of the film, presenting himself as the last in the line of family genealogy, bearing the burden of the accumulated family history we have just seen and heard.

Elephants presents an extraordinarily honest self-portrait of a divided consciousness, simultaneously attracted to and loathing the realm of wealth and privilege that his family’s past represents. As the family album images and parental interviews give way to Rogers’ camera prowling the streets of Boston, we sense his longing for another life, yet also his alienation from the images of a decidedly non-elegant world that surrounds him. The camera’s searching out of women (and the eventual pickup it records) carries a sense of timidity as well as lustful loneliness, as if searching for deliverance through erotic liberation (another Sixties cliché). But liberation remains elusive when the tryst we see, as analyzed years later by the quite wise woman he picked up, only reveals the fact of their mutual loneliness.

While Rogers’ films constantly reflect the visual acuity of a still photographer, in some way his use of sound stands as the most consistently original aspect of his films. Neither Quarry nor 226-1690 use synch-sound and although powerful synch-sound interviews occur in Elephants, that film also creates the tapestry of interweaving voices Rogers had experimented with in Quarry. This interweaving of voices (the collective voice of those who gather at the quarry; his parents’ voices in Elephants) affects us insidiously: they seem overheard and ambient rather than supplying the voices of authority and explanation so often encountered in documentary. These voices seem to penetrate space, overlapping in their stories, their maxims, and their proclamations. This interpenetration of space by voices coming from elsewhere becomes more literal in 226-1690 as Rogers makes an aspect of modern technology into a personal metaphor: the voices left on a telephone answering machine. In this, perhaps his most personal and even confessional film, Rogers never appears. In fact, we never see any of the people we hear on the sound track (or hear any of the people we see on screen); the independence of sound and image has never been stronger. Although the sound track is filled with personal details of Rogers’ life, the film has an impersonal, even distanced aspect.

This is not to say the film is distanced emotionally but, rather, that Rogers presents a life here in all its emotional complexity, however indirectly and enigmatically. As we listen and watch, we have to piece it together, identifying the voices of lovers, parents, friends, colleagues. Although confessional, the film remains elusive, with an elegant interplay of the revelatory and the oblique, the dialectical dance between intimacy and distance that characterized Rogers as a person and as an artist. But, unerringly, Rogers’ film gropes through personal details to achieve an insightful analysis of the way personal lives are negotiated in an age of global awareness and modern technology.

While Jan Lenica was a visiting professor at Harvard, Richard Rogers set out to make a portrait of the acclaimed Polish animator and graphic designer in action. Rogers structures his film much like his subject might, in funny fits and starts, with slightly ominous, minimalist camerawork interrupted by artfully composed, off-kilter perspectives. Throughout Rogers creates a sense of underlying mystery and irreverent humor. When a solemn Lenica admits to having “no working method” and trusting visual information over language, Rogers responds with a close examination of Lenica calmly engaged at the animation stand and, later, with an experimental cut-up audio track of Lenica’s terse aphorisms. After witnessing Lenica drawing, painting and shooting segments of his film Landscape in his Carpenter Center studio, Rogers brings that work to life so the audience can immediately witness the magical results of Lenica’s understated undertaking.

A dark allegory about the Second World War that Jan Lenica counted among his favorite works, Landscape was created during Lenica’s year teaching graphic design at Harvard in the Department of Visual and Environmental Studies. Landscape is also considered among Lenica’s most private films, drawing on experiences and memories of the war years that he had for very long deliberately avoided. The film’s animation of paper cut-out images driven by absolute cruelty suggests a child’s vision or dream of unspeakable horror. Equally important to Landscape is the powerfully asynchronous avant-garde score created by Garby Leon, then a graduate student at Harvard. 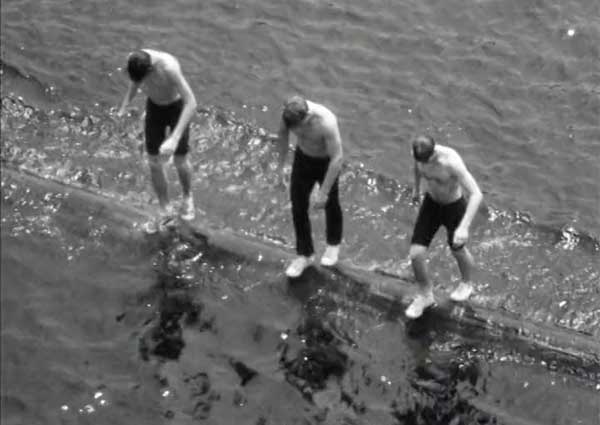 This portrait of an abandoned quarry in Quincy, Massachusetts captures the striking natural beauty of the site as it explores the social rites of the young people who gather along its rugged shores to enjoy leisure in what was once a place of toil. HFA 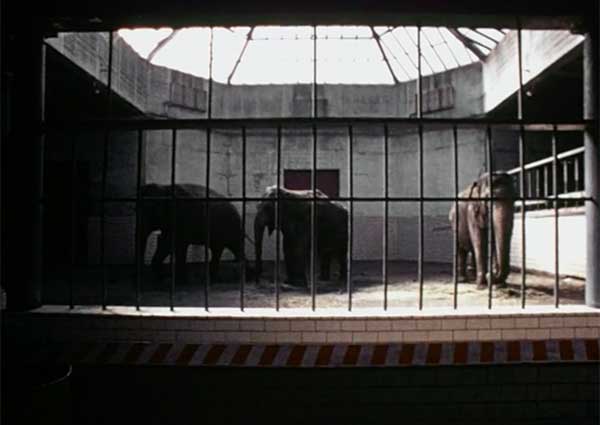 ELEPHANTS: Fragments in an Argument

A self-portrait of the filmmaker at twenty-nine, this provocative collage of photographs, street scenes, and interviews with family and friends seeks to prove that “one’s consciousness is the result of one’s relationship to power and not, as many believe, vice-versa.” HFA 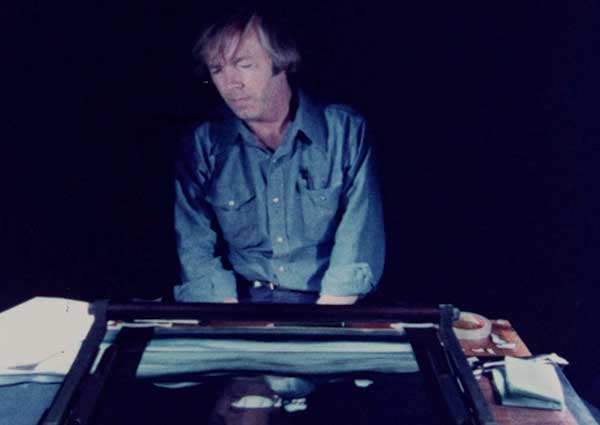 This film shows the Polish master animator Jan Lenica working on his film Landscape, and explores the relationship of the artist between the real world and his fantasy visions. 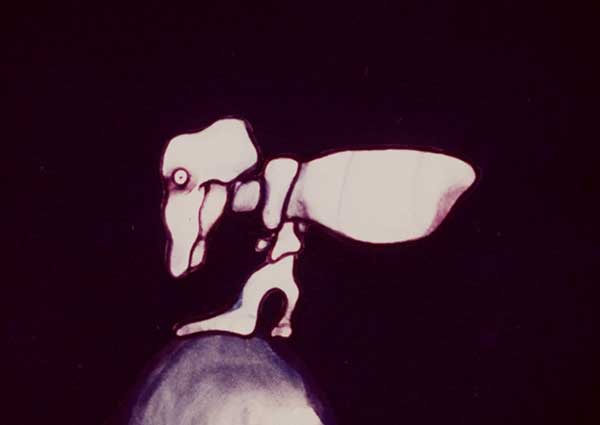 “Landscape is a nightdream, a landscape of my mind, of my imagination. It evokes memories of the past, reflects the images of reality into the world of fantasy. But the word dream has in this case another meaning. There is also the dream of reason which produces monsters and that is what is learned from Goya’s Caprices and explains in the best way the significance of my film,” Jan Lenica. HFA 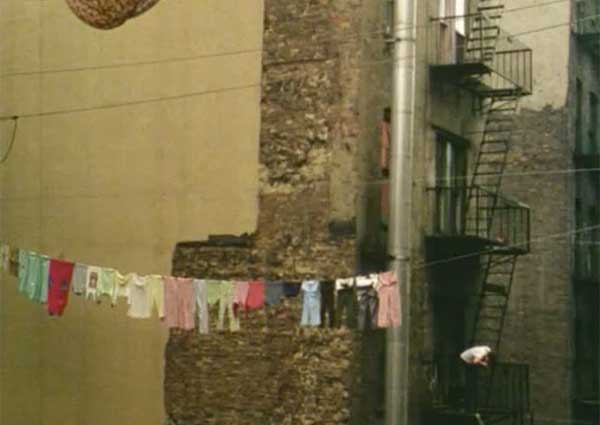 Rogers created this “minimalist soap opera” out of messages left on his telephone answering machine over the course of an entire year. Together with the accompanying visuals of scenes shot from the windows of the filmmaker’s New York loft, the recordings provide an amusing account of life caught between the public and the private; we see weddings take place in the church across the street, passersby struggling through the snow on the sidewalk, gradually becoming submerged in the meditative rhythms of Rogers’ interior world. HFA