Wolf-Eckart Bühler on his film

Hannah Arendt once wrote that the Eichmann trial taught the world the banality of evil. For the people responsible for the war in Vietnam this term could be inverted: they have taught us the evil of banality.

The war is over, but in some the memories continue to smolder. Christmas 1984, Bangkok, Thailand. John Scott, an African American Vietnam war vet, is searching for himself and returns to the scene of the act. Like a criminal, like a lover… Waiting for his visa for Vietnam, he encounters an obscure Christmas party in a small bar in the middle of Bangkok’s entertainment district. The guests are compatriots: mercenaries, CIA agents, former GIs. John Scott learns of the existence of several thousand Vietnam War vets who never returned to the US and are now living in Thailand.

Who are these men? Why have they remained? What are they doing in a country that must remind them of the one where they had killed and almost were killed themselves? What does this war mean to them, so many years later? Confused and curious, John Scott searches for them. He finds them everywhere: in bars and brothels, at beaches and in slums, on the paddy fields and not far from former air bases. For over a dozen years, the Americans have not only used Thailand as a “recreation center” for their GIs in Vietnam, but also as an “aircraft carrier” for the bombarding of Laos, Cambodia and Vietnam. And he didn‘t know anything about that?

Samai, whom he had thought was Thai, is the daughter of an American soldier she has never met. Thousands of  so-called “Amerasians” exist in Thailand, she tells him accusingly. Increasingly more bitter and introverted, Samai guides him through a world he surely wouldn’t have known without her. The more she starts to learn about herself, the more he begins to understand as well. John Scott decides to turn back. He will try finding himself at home.

The film’s protagonists, American actor John Anderson (main actor in Haile Gerima’s ASHES AND EMBERS) and Thai Gillian Tuyudee Hornett play themselves: John Anderson served as a soldier in Vietnam for two years, in 1969 and 1970, and Gillian T. Hornett is the child of a GI. All the other people in the film are what they really are: bar owners and journalists, farmers and slackers, dancers and sex workers, Thai boxers and mercenaries… Every one of them and each in their own way a victim of the war they owe their existence to; clandestine uncanny witnesses of a past that is here and there unwanted and suppressed; foreign and homeless in a country that may have given them shelter or a place to live, but never a real home.

The Vietnam War has left many victims behind and some of these have to continue living with what they experienced… John Scott’s lonely wanderings through Bangkok and Thailand, his encounters and discussions are an excursus on guilt, powerlessness and suppression. And maybe on hope. 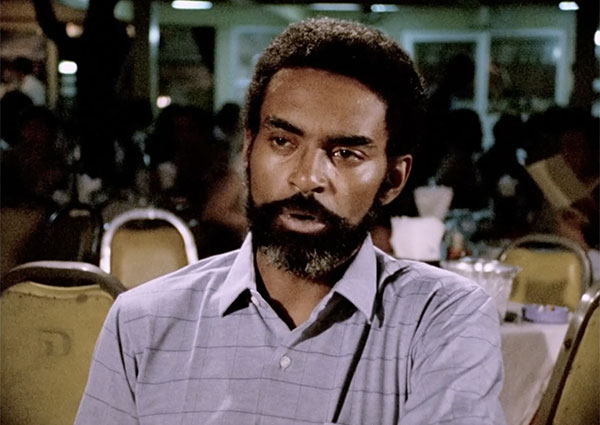