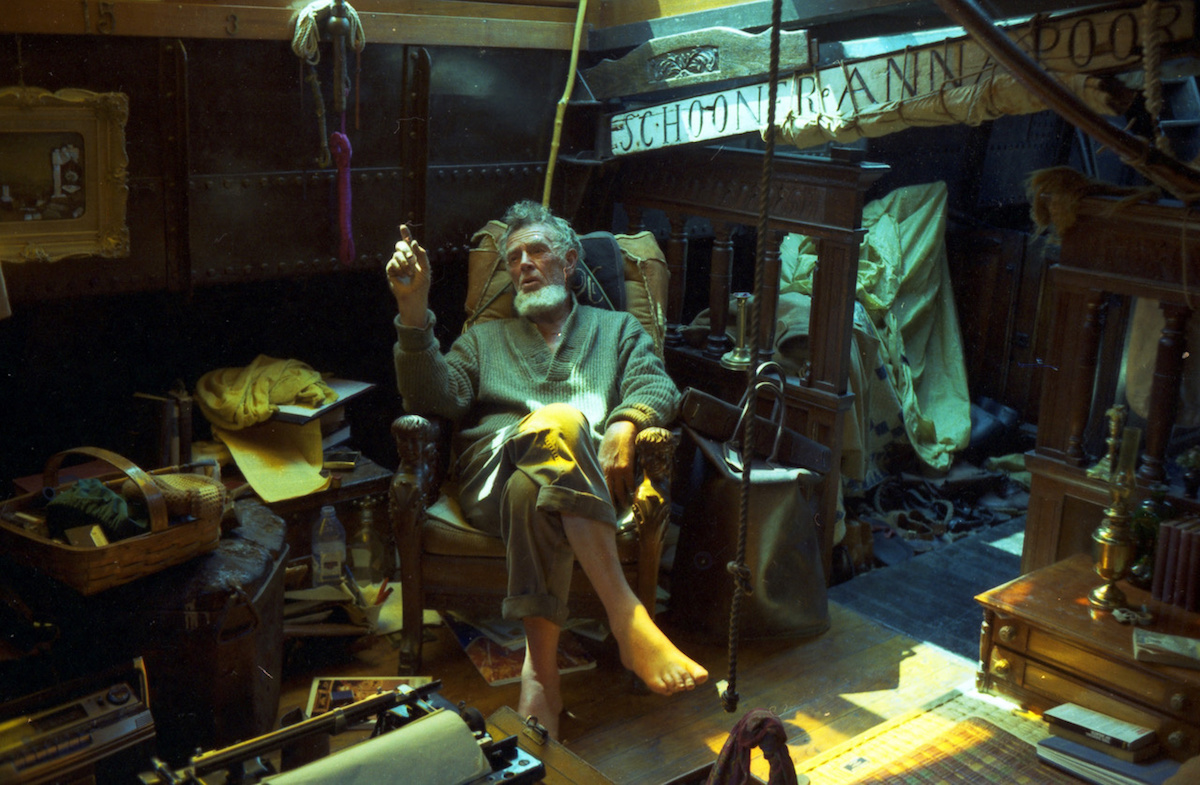 For the first time in Spain The German director Wolf-Eckart Bühler will present his diptych about the fascinating actor, navigator, war hero  as well as  writer, Sterling Hayden.

February 20, 2019.- The International Film Festival, Play-Doc, which celebrates its fifteenth edition from April 3 to 7 in Tui (Galicia), will include two recently rediscovered film treasures in its program, as yet unscreened in our country: Leuchtturm des Chaos, 1983 (Lighthouse of chaos) and Der Havarist, 1984

Both films approach the complex figure of Sterling Hayden through radically different proposals. While the first is a documentary that puts together the interviews resulting from the meetings between the actor and Bühler, the second is a film adaptation of Hayden’s autobiographical book The Wanderer (1963), with a strong political and authorial dimension, made in the last years of the so-called New German cinema (Neue Deutsche Welle).

Sterling Hayden (1916-1986) will be remembered for his roles in great classics such as Johnny Guitar (Nicholas Ray 1954), Dr. Strangelove (Stanley Kubrick, 1964) or The Asphalt Jungle (John Houston, 1950), however his real life surpassed any of its characters in fiction. At age 22 Hayden was already a ship captain, having circumnavigated the earth several times. After winning a race in Gloucester, Massachusetts, a photo of him published in a local newspaper opened the doors to Hollywood signing a millionaire contract for Paramount Pictures. During World War II, Hayden commanded a convoy of 400 ships with supplies for the Yugoslav partisans besieged by the German army and landed by parachute behind the enemy lines. He was the only American soldier to be awarded by the US government as well as by Marshal Tito.

Upon his return home, and as a result of this experience, Hayden flirts with the communist party, but although fleeting, this connection soon forced him to report to the Anti-American Activities Committee (House of Un-American Activities Committee, HUAC). Under threat of losing custody of his children, he was forced to give several names that were already on the FBI lists.

This act of betrayal that was received as a gesture of patriotism and for which Hollywood rewarded  him with a long series of films, caused Hayden to sink into repentance, shame and contempt for himself, entering into a spiral of alcoholism and self-destruction. Hayden left Hollywood and the acting work that he despised so much and returned to the sea. He also wrote two excellent books: the autobiographical The Wanderer (1963) and Voyage: A Novel of 1986 (1976), both enormously acclaimed by critics.

Hollywood had already tried to bring the exceptional life of Hayden to screen for many times without success, even with Robert Redford in the leading role.

But it is finally the German filmmaker Wolf-Eckart Bühler who got Hayden to give him the rights for The Wanderer and began filming Der Havarist. After the first conversation between the two, Sterling himself suggested filming these meetings and that is how the moving Leuchtturm des Chaos emerged (the title refers to the novel of the same name that Hayden never ended).

Wolf-Eckart Bühler (Hamburg, 1945) studied theater and philosophy in Munich. He was also editor of the film criticism magazine Filmkritik. He worked as a writer, director and producer at Red Harvest Films, performing Leuchtturm des Chaos (1983), Der Havarist (1984) and Amerasia docudrama (1986), as well as a dozen documentaries for German public television. Bühler himself, who received an award in recognition of the importance of his work at the Locarno film festival last August, will be present at Play-Doc to talk about his films and his fascination with the dazzling and unusual movie star.