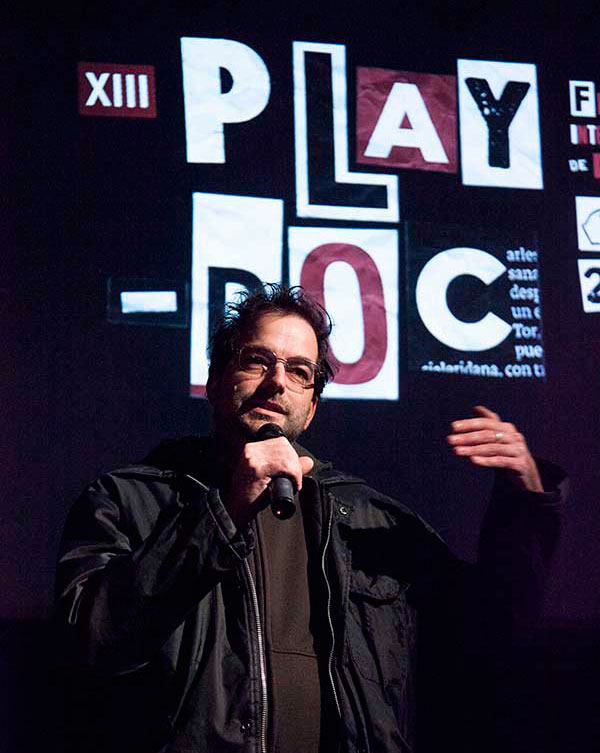 It’s Dominic Gagnon, from Rimouski. I’ve been struggling to make films for 20 years: sometimes they work, sometimes they don’t. But in a retrospective, they all work. Why? Because they finally have an audience. An audience that could have been from Rimouski, but ends up being from Tui. Why Tui? We’d have to ask Sara and Ángel, but the question is not so much about why, but how. How is it that I met, after a twenty-year career, a journalist from Cahiers du Cinéma? How did I end up in a mosh pit laughing my head off with Dirty Coal Train? How did I meet Claire Simon, an icon, who I fell in love with in the time it took us to go into a restaurant? How was it that there was a different audience for each screening of my films and how was I able to have such great dinners among such great company every evening? How did I find, in this old walled town, the peace and protection to talk about my problems as a film-maker and about my quirkiest projects? It was in 2017, in Tui, where I recovered the confidence I had lost after the long controversy which followed my film Of the North (2015). I met some fantastic guests from New York, Paris, London and Berlin, but even more from Tui and the surrounding area. People who are passionate about cinema and proud of their festival. Walking around the town’s streets and seeing that there was a poster about the festival in each shop window really warmed my heart. There wasn’t a single moment in which I didn’t wonder: why isn’t it like this in Rimouski, my home town, which is a little bigger than Tui, but equally off the beaten track as far as large cities are concerned? Why? Well, the answer is simple. We come back to Sara, Ángel and the members of their team – practically all of them became my friends after just one week. I will always come back to Tui. Thanks Play-Doc. Keep on Rockin’!

“Every deviation from conventional, dead, official cinema is a healthy sign. We need films which are freer and less perfect,” said Jonas Mekas.

This statement could well be the motto of this fourteenth edition of Play-Doc. It is an edition filled with free-spirited films. Examples are those by Goldman (the subject of our director retrospective), who was a true “apostle of the unique”, and a major but forgotten genius of New American Cinema. Or those by Aloysio Raulino (about whom we are showing the first international retrospective), which are original, unclassifiable and unknown. This free spirit can also be seen in Ozualdo Candeias’s films, to whom we pay a small but necessary tribute, celebrating the centenary of the birth of this pioneer of auteur cinema and Brazilian Cinema Marginal. This freedom, such a key characteristic of these three directors and also present throughout the rest of the programme, is inextricably linked to a strong focus on society’s margins. Freedom and the margins find their perfect stage in the streets. It is our wish for you to wander through these streets, which are ubiquitous at this year’s event, to lose yourself in them, to turn off the conventional path and go down edgier side-streets, which may not be so safe, but are far more exciting and interesting.