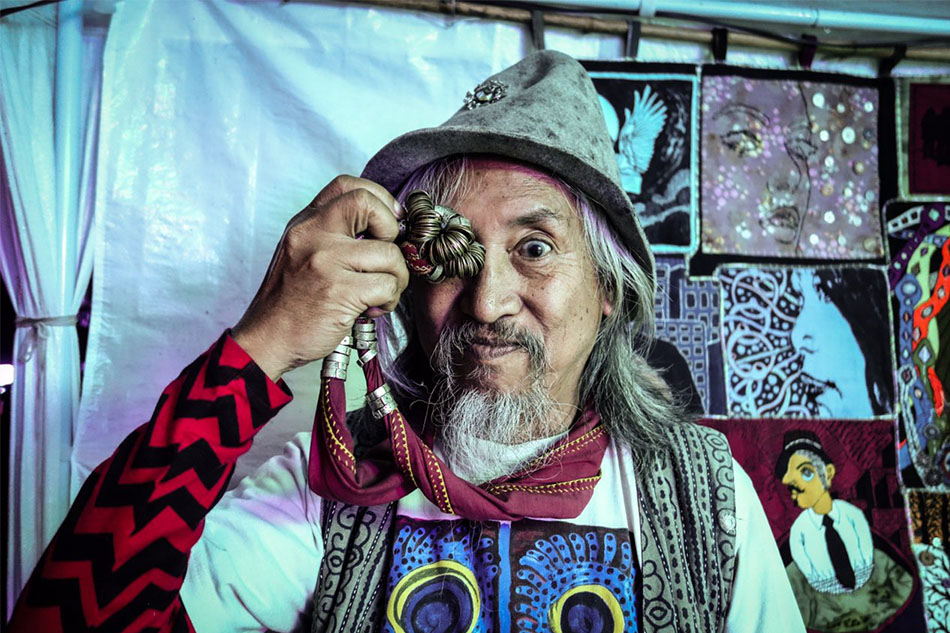 Considered as the father of Philippines independent cinema, the legendary artist and filmmaker Kidlat Tahimik will return to Spain, after four decades, to present what will be his first retrospective in our country.

The fifteenth edition of Play-Doc, Tui International Film Festival, which will take place from April the 3rd to the 7th, is happy to present its first retrospective dedicated to the unique Philippine filmmaker Kidlat Tahimik. The charismatic and iconoclastic Kidlat Tahimik, whose name in Tagalog means “the silent lightening”, will be at the festival to present his film work and to share his special ways of making and understanding cinema.

Born in Eric de la Guia, Baguio City, in the Philippines while still under US control, Kidlat Tahimik studied economics and business management in Wharton, at the Pennsylvania University, USA. He worked as an economist in France before making contact with his first camera, a 16mm Bolex, in Germany. From this moment on he would dedicate his life exclusively to art and the rediscovery of his own roots.

In 1974  he appeared in Werner Herzog´s film The enigma of Kaspar Hauser, playing the role of the village chief who plays his nose flute to keep his tribe alive. This small role gave birth to the character that Kidlat would make his own and even exceed during his career.

While the golden age of Philippine cinema was ruled by Lino Brocka, Ishmael Bernal or Mike de Leon, Kidlat followed a parallel trajectory. His first film, the cult work Perfumed Nightmare (1977) won three awards at the Berlin Film Festival and went on to be distributed by Francis Ford Copolla´s  Zoetrope.

All of his work, of a semi-autobiographical nature, is marked by a profound critique of neocolonial exploitation, globalization and cultural imperialism. The prankish humor and the apparent naivety that pervade his films are the key tools to report and invert an idea of unlimited progress that has relegated part of the world to sadness and poverty. In his early works, from the 70´s and 80´s, the awakening of the American dream and the consequent return to the roots were reflected. In his works of the 90´s and 2000´s there is a clear effort by Tahimik to reconnect with the Igorot indigenous culture, pursuing it together with other ancient Asian cultures.

In the 2000 the world saw the birth of a new wave of important Philippine filmmakers like Brillante Mendoza, Raya Martin or Lav Díaz, all influenced and inspired by Kidlat Tahimiks work, who is widely considered as the father and pioneer of the new Philippine independent cinema.

He has recently been acknowledged in Amsterdam with the Prince Claus Award and in 2018 he received the most important award granted to an artist in the Philippines receiving the title of National Artist of the Philippines. In addition, at this time Perfumed Nightmare, is being exhibited at the Berlinale marking its recent digital restoration.

With this retrospective, in addition to the rest of the programming that will be revealed in the following days,  Play-doc aims to bring once again to the border city of Tui filmmakers of enormous international prestige, as well as some interesting discoveries, lots of premiers and genuine film jewels.

Play-Doc is an independent festival held every spring in the beautiful and ancient city of Tui, in Galicia, right on the border with Portugal. A small festival, but of enormous international importance, Play-Doc has established itself as a reference, managing to maintain a unique festival model with rigorous programming with a large and extraordinarily heterogeneous audience. Throughout these fifteen years, Play-Doc has had the pleasure of receiving true legends such as Albert Maysles or Artavazd Pelesjan, and other cult filmmakers, forgotten, censored or unknown like Charles Burnett, Peter Emanuel Goldman, Aloysio Raulino, Bogdan Dziworski or Nicolás Guillén Landrián. All of these in first spanish retrospectives, and in some cases in first international retrospectives.