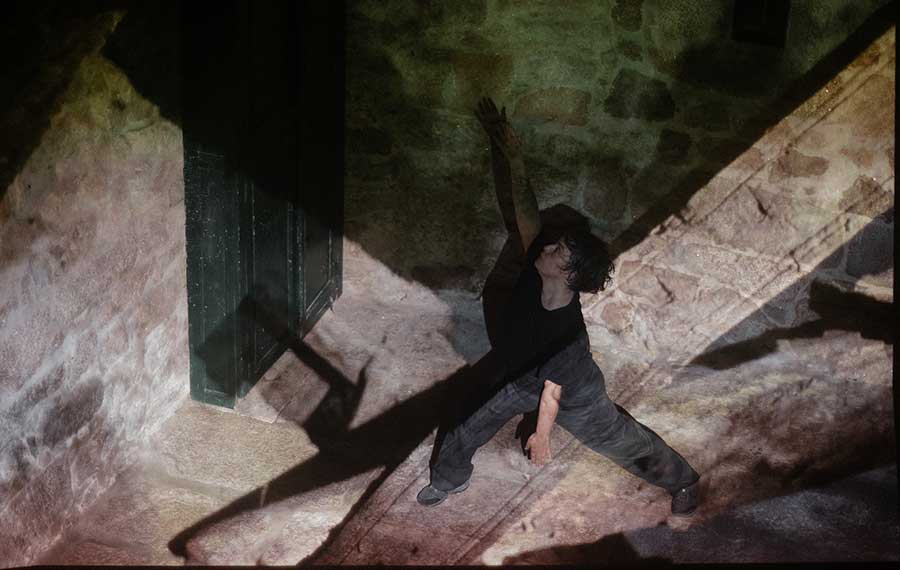 Cinema Tours is an original proposal that takes artistic cinema beyond the traditional cinema and screen to project it onto historic buildings in Tui. In this third edition, we propose the union between live cinema and contemporary dance. We want to present a pairing between these two expressive forms, which together give rise to a new art form, ‘choreocinema’, so called since the 1940s already after the film-dance experiments of the legendary filmmaker Maya Deren, who understood the film medium itself as a choreographic practice.

Choreography and cinematography are both scripts (graphic representations) that play with space, time and movement. When cinema was born at the end of the 19th century, dance (which dates back to the origins of human beings) could finally be recorded, studied and immortalised beyond its ephemeral nature. If contemporary dance arose as a reaction to more classical forms, avant-garde cinema also rebelled against conventional discourse, in both cases proposing new forms of art in movement.

We invited six radical artists, three of them choreographers-dancers (Mercé de Rande, Carolina Fernández and Echo Higuchi) and three visual artists-filmmakers (Judith Adataberna, Marta Valverde and João Beira), to create a live performance in pairs. A partner was proposed to each artist based on affinities and correspondences, and so each artistic duo immersed itself in an intense, rich and collaborative process, in which the improvisation that they all practice can be appreciated. Five of these artists are women and, in this sense, the insistence is on an insubordinate, mobile, fragmented and deeply subjective female gaze.

Her creative partner is Judith Adataberna, also from Galicia, an experimental filmmaker and photographer, who extends her praxis to video installation and live cinema. Together with Mercé de Rande, she focuses for this project on atavism, nature and Galician myths and legends.

Carolina Fernández (Grenoble) is a visual and performing artist, playwright and dancer. Her interdisciplinary training brings to her works a combination of languages between the performing arts, performance art, installation art, poetry and video.

Marta Valverde (Nigrán) is a visual artist who plays with cinema from the autobiographical documentary, shifting it towards live cinema and VJing, exploring the margins of the medium and multiple screens and also encompassing photography and music videos. Together with Carolina Fernández, she immerses herself in a creative process beyond conventionalisms.

And finally, as a presence in movement, a designer of artistic clothing and accessories, hats and masks for fashion and performance art, also a fire dancer and circus artist, the Japanese Echo Higuchi (Osaka, Japan), who brings her universe of trance aesthetics and tribal fascination to design and art direction.

João Beira (Porto), a visual artist, specialist in immersive and large-scale installations, 3D video mapping and live visuals, software developer and code artist, has focused his artistic practice and academic research on the interaction between light, the body, dance and live and interactive audiovisuals. His interest in the unexpected, nature, living systems and psychedelia merge with those of his creative partner, Echo Higuchi, who brings the presence of her body and the power of design. Both are members of the Datagrama Visuals collective.

Today all the arts merge and these artists explore in their works the contemporary audiovisual language when the performing arts feed back into it. For the spectator, a unique experience with three stops along the way, three unrepeatable performative actions specifically designed for Play-Doc. Long live cinema, long live dance!