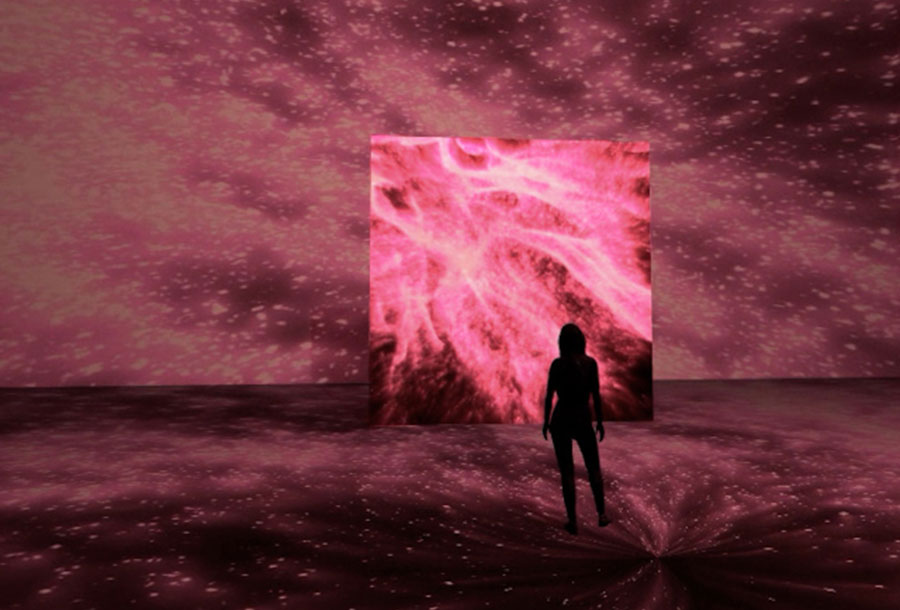 Today cinema is more alive than ever. The digital revolution has brought with it a veritable explosion of possibilities. Today’s real-time editing softwares allow the image to take shape live, processed, multiplied and projected onto any surface, flat or dimensional. The computer and the projector become an extension of the artist who can create a more performative cinema, and integrate herself into the work, whilst integrating the spectator. In reality this is not so new, live performance and an overflowing screen have been happening in cinema since its origins, with the avant-garde and in the 1970s under the name “expanded cinema.”

We want to focus on a group of creators, of recognised talent, whose discourses run along the limits of the liberated screen. Their works produce filmic and videographic hybrids in which projection, performance and installation take centre stage. Their proposals explore new forms and narratives, allow for improvisation, are multi-screen and turn the artists into performers, editors, filmmakers who presents their experimental films as living.

In this edition entitled Cinema recorridos II: visiones nocturnas, Play-Doc once again invites five artists to choose a location in Tui in which to create site-specific installations. Each participant works by complementing their own material with archival material provided by the festival, of Super8 home-videos from the 60s, 70s and 80s, filmed by Tui locals. The idea is to appropriate these documentary images and give them a new understanding.

Juanjo Fernánez Rivero, better known as Gnomalab, is one of the most renowned Spanish creators of visuals and ‘videomapping’ on the global scene. Born in the Barcelona underground scene, he has spent a quarter of a century exploring live cinema and reclaiming the artistic legitimacy of the medium. A multidisciplinary artist, he is also a musician and member of the acclaimed band The Suicide of Western Culture. He will make a live cinema work in collaboration with the ethnomusicologist Carlos Suárez.

Iria del Bosque and Borja Bernárdez co-direct their creative studio MIL 111, and will return from Madrid to their homeland to share the research of their artistic/experimental laboratory MIL111.lab. Together they propose alternative and immersive universes born from fissures in reality provoked by light, space, image and sound. They combine art theory, psychology, sociology, digital media, audiovisuals and programming to reflect in an interdisciplinary way on humans and their individual and collective existences. In this event the sound design will be made by Carlos Besada aka Verbose.

Montse Pinheiro is a Galician artist who works tenaciously as a set designer and theatrical and musical lighting designer. She experiments with drawing, illustration and sculpture. In her peculiar research she works with ceramics, stroboscopic animation and stop-motion, techniques that she has fused into a series of experimental animations set to music that have been screened at international film and animation festivals.

Juanma LoDo combines his activity as an experimental musician with other fields such as photography, graphic industrial and web design, documentary and multimedia art. A multidisciplinary hyperactive artist and tireless collaborator with other artists, he has created audiovisual art pieces for the theatre, nightclubs, festivals (Vjing, Mapping) and created multimedia installations for museums and arts events.

We have presented a group of artists who have a similar tradition and are recognised within the scene of today’s so-called “visualistas.” Although their creations, in practice, have a lot to do with experimental and avant-garde cinema, paradoxically they are often not associated with it.

It is in this sense that it seemed essential, to us, to complete this list with a pioneering collective of expanded cinema in Spain: AA++ is a creative laboratory formed by Ana Domínguez and Ángel Rueda, two film artists who develop their work through the live presentation of the optical-mechanical technologies of cinema (performances with celluloid in Super8 and 16mm). For the last 12 years, they have directed the (S8) Mostra Internacional de Cinema Periférico de A Coruña, a festival of international renown that promotes the survival of film as a medium.

Cine Recorridos II: Visiones Nocturnas invites us on a nocturnal tour of Tui that will be an immersive, multi-sensorial and multi-screen cinematographic experience, with a diversity of exhibition contexts, in urban and natural spaces. It is a unique and original event produced exclusively by Play-Doc that proposes new pathways for contemporary audiovisual creation.